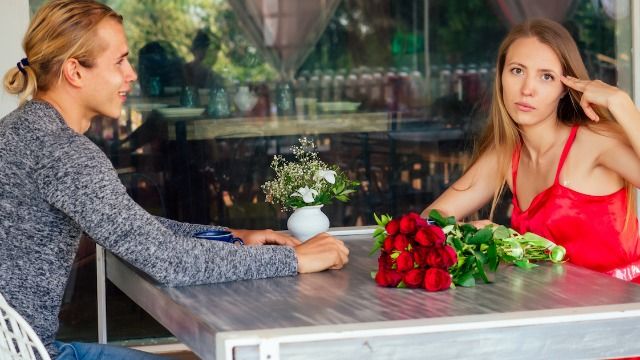 Dating is one of those often-uncomfortable activities that can yield a positive outcome. Like working out or filing your taxes or eating kale. Of course, getting to know someone over drinks or a meal isn't always terrible. Sometimes it's even fun and can lead to love or sex or at least someone to watch Netflix with. But other times, it leads to disappointment or even disaster—and a good story to tell strangers on the internet one day.

Someone asked Reddit: "What is the biggest fail date you have ever had?" These 16 people share their stories of dates that went very, very badly:

I went out with a guy who wore the puffy shirt from Seinfeld. I swear this was the same shirt. i looked beyond that, or at least tried to, and continued with the date. he later had a meltdown in his car because i said hello to a male friend we had seen while we were at a coffee shop and laughed when he told a story to me. he said my laugh was sexual towards him and that he shouldn't have 'fallen for me' so quickly and wouldn't have if he'd known i'd 'cheat on him so fast'. he was crying really hard the whole way back to my house.

it was the most awkward car ride home ever. we never talked again.