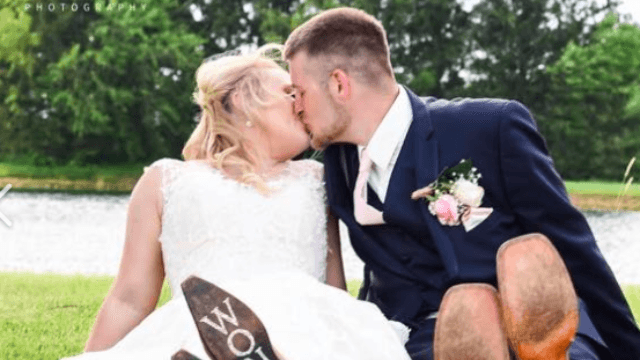 Single people who have found themselves in the midst of wedding season will deeply, deeply relate to one man who couldn't help but pose in his best friend's wedding photoshoot.

Captured by Country Roads Photography aka photographer Lindsey Berger, the photos show two sweet kisses between the happy couple, and one pouting man who can't handle all this bliss.

"Well, we all know that Mitch wasn't easily letting his best friend go.....but, I think he handled it rather well," says the caption. Thankfully, the couple is in on the joke. The bride's shoes read "I DO," while Mitch finished off the sentence with "'NT" as he tries to third wheel his friends' marital kiss.

In the second photo, presumably taken on the couple's wedding day, the bride has upgraded her shoes to say "I WON." Mitch pouts in the corner with the response, "SHUT UP."