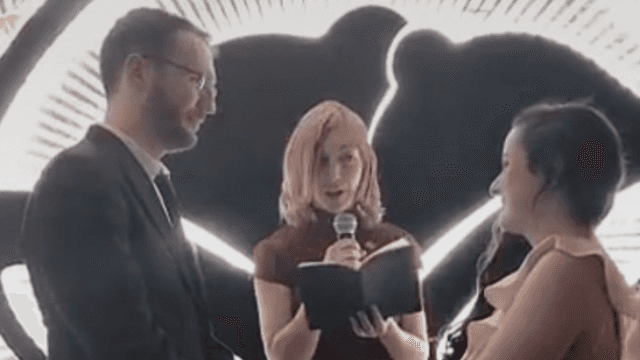 One couple just got married inside a Taco Bell. But at least it was a fancy Taco Bell.

Dan Ryckert and Bianca Monda are starting their marriage off by breaking a record. For better or worse, for gourmet or dollar menu, they became the first couple to get married in a Taco Bell.

Today's the day! #LoveAndTacosContest winners @DanRyckert & Bianca are getting married. Catch the wedding on our #Snapchat. pic.twitter.com/rOczqCM1kY

The pair didn't just walk into any old KFC/Taco Bell location and elope (although that would have been pretty badass.) They won a contest for an all-expenses paid wedding at Taco Bell's new Las Vegas flagship, aka Taco Bell Cantina. People reports that Ryckert and Monda won after submitting a 30-second video to the brand's "Love and Tacos" contest.

In keeping with the Las Vegas theme, the new location does have a bonafide wedding chapel. Still, the style and the catering is all old-school Taco Bell. Monda carried a sauce packet bouquet, and the food consisted of Cheesy Gordita Crunches, burritos, and chips and guac. The cake was a two-tiered Cinnabon.