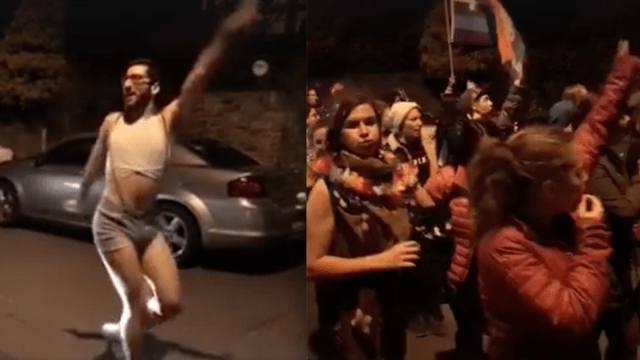 Some folks killed two birds with one stone on Saturday night, by going out dancing and doing it to promote climate justice, LGBT rights. And they did it in front of Ivanka Trump and Jared Kushner's $5.5 million D.C. home in the exclusive Kalorama neighborhood.

Hundreds of protestors rallied together to "send the clear message that our climate and our communities matter," Fox News reports. Specifically, the protests were a reaction to the Trump administration's rollback of Obama's climate change policies. Unfortunately, it was likely that the protests fell on deaf ears, as The Daily Mail reports that Ivanka was last spotted on Friday night in New York City with her family.

Some of the neighbors, however, were home. And boy did one of them not appreciate the racket. One 82-year-old resident supposedly yelled at the crowd, "get out of here! I live here... Do you want to get your f---ing face hit?" In the video, you can hear one protestor say to the resident, "do you want to hit me man?" to which he replies, "I'd love to." While the video (which you can watch, courtesy of The Daily Mail, below), shows a heated exchange, police told WUSA that the protests ended peacefully. And the video of protestors dancing to KeSha's "Blow" looks like it was a pretty good time.