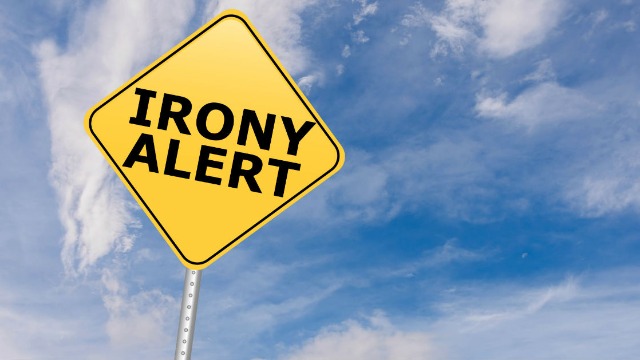 16 people share the most ironic things they've ever seen.

Remember when Alanis Morissette confused the whole world with her song, "Ironic" that didn't feature one genuinely ironic scenario?

Rain on your wedding day isn't ironic, Alanis! Rain at a charity event to raise money for a drought would be ironic, but I guess that doesn't sound nearly as fun in a pop lyric. Still, grammar and language nerds often need to relax their grip on when and how people use the word, "ironic." Irony is usually characterized by something so unexpected it is funny, such as the classic example of a champion chess player losing to a first-time player. Over time, the word has been used to describe anything coincidental, which gives Alanis a little more credit. Regardless, irony is all around us and we've all had at least one moment where we feel like we're living in a simulation designed by puppet engineers with a twisted sense of humor. Plus, "Ironic" is a great song.

So when a Reddit user shared, "I attended a funeral today for a man who was a refrigeration specialist. There was no reception because the church's refrigerator broke and the food was spoiled. What's the most ironic thing that's ever happened to you?" people were ready to offer their own moments of ironic weirdness. Life is a confusing, mysterious journey in chaos! Good luck out there...