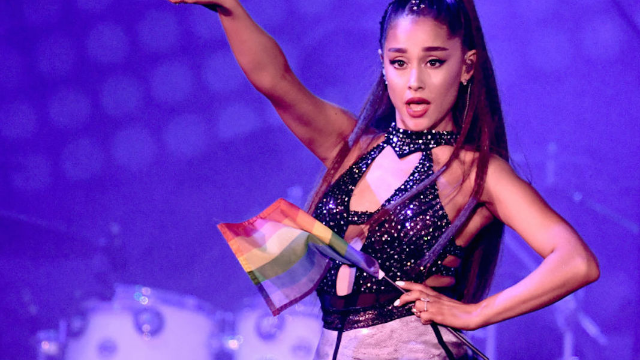 All the spicy Ariana Grande gossip we learned from the internet-breaking ‘Thank U, Next’ video.

I come to you today still reeling from the iconic 'Thank U, Next' music video. Ariana Grande has officially confirmed herself as our queen. As if we needed any more proof. Not only did this video serve lewks, pay homage to our favorite films (Mean Girls, Bring It On, Legally Blonde, and 13 Going On 30), and ultimately break the damn internet, it also spilled some seriously hot tea. Ariana Grande gives us more than we could ever deserve.

If you haven't watched the video yet, I'm not really sure what kind of dumb rock you're living under, but I will tell you about everything you missed nonetheless. The video opens with a montage of Mean Girls references, as any piece of art should. Ariana is dressed as Regina George and she's writing in her 'Thank U, Next' version of a burn book. She sings about her exes, and when she gets to Pete Davidson she writes, "Srry I dipped,"confirming that she was the one who broke off the engagement. When the news of the break up broke, it wasn't clear exactly what went down. I mean, we all could have guessed that it was the goddess who no man deserves who ultimately called it quits, but it's still satisfying to receive confirmation on this.