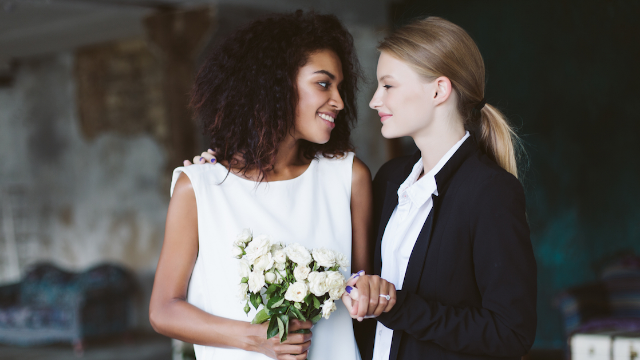 Christian man gets a Bible lesson after trying to exclude his kids from his gay sister's wedding.

Not all religions are homophobic, but a sizable number of religious people still abide by homophobic interpretations of their text of choice. Having a devotion to that text, while still navigating a world full of diverse people you love can create some fairly clear contradictions. For example, if you love her sister and she's gay, then the logical step for most people would be to support that relationship and stand up for your sister's rights.

However, for someone who genuinely believes the Bible prohibits and discourages LGBTQ relationships, then a certain level of cognitive dissonance arises.

In a recent post on the subreddit Am I The Asshole a man asked if he's an asshole for not wanting his daughters to be in his sister's "gay wedding."

"AITA for not wanting my young daughters in my sister’s gay wedding?"

"Throwaway for pretty clear reason.
I am a brother to a pretty awesome little sister (24) and also a dad of three beautiful little girls (2, 5, 9). My sister dated men throughout her teenage years and I’d always assumed that’s how it’d stay. However she is now engaged to be married to a woman. Her soon to be wife is a really cool person and my own wife and I have enjoyed having her over and the kids enjoy her company. We haven’t told them they are dating."