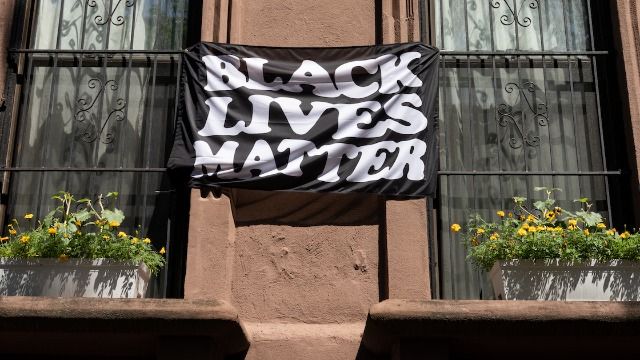 Couple receives surprising note from neighbor after someone ripped up their BLM flag.

A San Diego couple received a kind note from a stranger after dealing with vandalism and harassment over their Black Lives Matter sign.

The couple, who told Upworthy to call them Ellen and Patrick Miller instead of their given names in order to protect their identities, hung a Black Lives Matter flag outside their house after the murder of Ahmaud Arbery.

They hoped the flag would signal their awareness and solidarity, while potentially challenging the close-minded and racist people in their own communities.

While the flag itself didn't receive backlash in the beginning, they have been painfully aware of the opposition in their community. During a Black Lives Matter rally they organized in their suburb, members of alt-right extremist groups showed up to counter-protest.

Given the local culture, they were both unsurprised and disappointed when they recently returned home to discover their flag had been sliced in two, with the remains scattered around the yard.