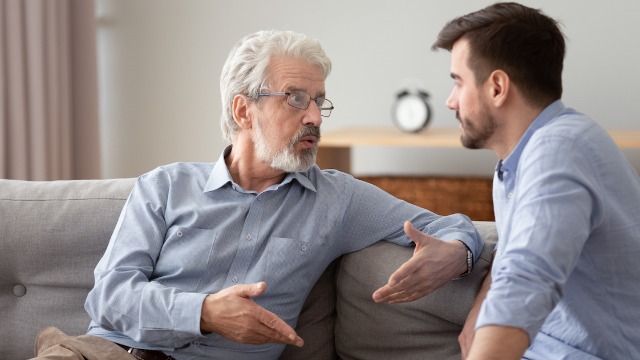 Dad asks if he's wrong for telling son that he sometimes regrets marrying his mom.

The line between oversharing with an adult kid, and getting real about your world view can be tricky to maneuver, particularly when it comes to romantic relationships.

In some cases, adult children wish their parents would get more honest and stop playing the parental role, while others wish there was a better boundary when it comes to hearing about longing and regrets.

Striking the balance between truthfulness and emotional transparency can be extra wrought when talking about the relationship that made the kid exist in the first place.

In a post on the Am I The A*shole subreddit, a dad asked if he was wrong for sharing regrets about his relationship with his son's mom during a recent conversation.

AITA for possibly encouraging my son to break up with his girlfriend and telling him I have regrets about marrying his mother/my wife?

OP shared that his son is slated to start college in the fall, and is currently deciding whether to stay with his hometown girlfriend despite the pending distance.

My son will be starting college this fall. He will be attending a school out of state while his girlfriend stays home to attend college. Because of the distance, they have been discussing whether or not they will try to make things work, and they have struggled to make a decision. He asked his mom and me what we thought he should do, and for a long time I refused to advise him other than to make some very high level comments and generalizations. His mother/my wife, on the other hand, has encouraged him to stay with his girlfriend, even though I asked her to remain impartial.