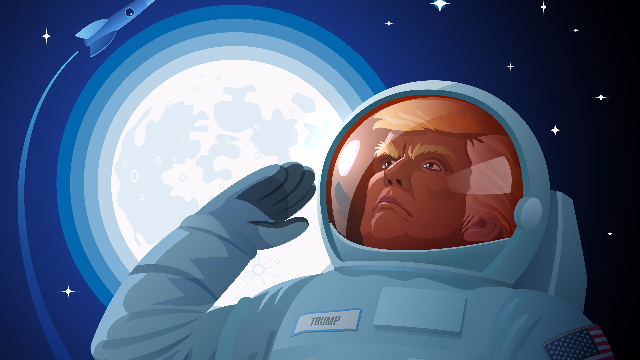 Trump's take on the moon and Mars makes us want to leave this planet.

It is with a heavy heart I report to you that the president's stupidity appears to have reached new heights...or new lows. Unsatisfied with just denying earth science and condemning humanity to an unlivable future because of climate change, Donald Trump has set his sights on the solar system, saying dumb stuff about the moon and Mars that you wouldn't accept from somebody over the age of six.

Flip-flopping a mere three weeks after declaring his administration's intention to stage of a revival of the moon landing, Trump declared that NASA should focus on "Mars (of which the moon is part)."

For all of the money we are spending, NASA should NOT be talking about going to the Moon - We did that 50 years ago. They should be focused on the much bigger things we are doing, including Mars (of which the Moon is a part), Defense and Science!

Um, it doesn't take a Very Stable Genius to know that THE MOON AND MARS ARE TWO DIFFERENT THINGS!!!