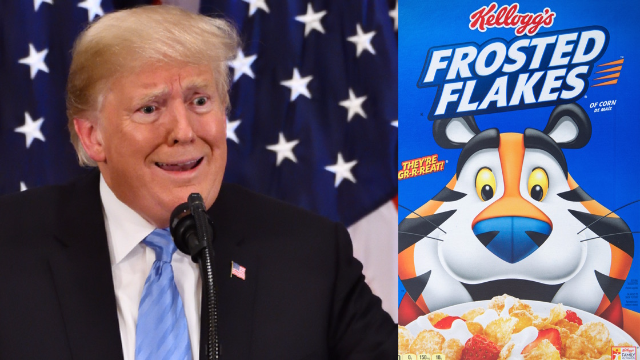 Trump said that you need a 'voter ID' to buy cereal and the internet is milking it.

Trump sat down with Trump-friendly website The Daily Caller on Wednesday, and in the midst of spreading conspiracy theories about voters in Florida, proved just how in-touch he is with both the common man and the electoral process.

The president falsely claimed that "when you buy a box of cereal — you have a Voter ID."

It's even more insane in context:

“The Republicans don’t win and that’s because of potentially illegal votes,” Trump complained. “When people get in line that have absolutely no right to vote and they go around in circles. Sometimes they go to their car, put on a different hat, put on a different shirt, come in and vote again. Nobody takes anything. It’s really a disgrace what’s going on.”

"If you buy a box of cereal — you have a voter ID,” Trump continued. “They try to shame everybody by calling them racist, or calling them something, anything they can think of, when you say you want voter ID. But voter ID is a very important thing.