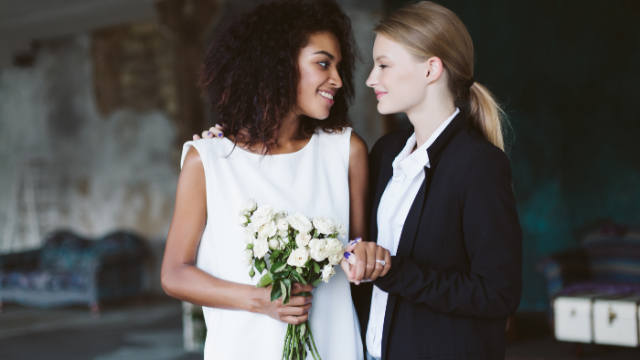 The Hallmark Channel had a stressful weekend, to say the least.

Everyone's second-favorite cheesy Christmas movie manufacturer (after Lifetime, of course) found itself in a major PR storm after banning a series of ads that featured women kissing each other. The company has since lifted the ban, and even apologized to its LGBT+ viewers.

It all started with the ads.

The commercials, which are for wedding website Zola, first aired on Dec. 2. They were part of a series of six ads featuring a cast of brides and grooms, including one lesbian couple. Four of the ads showed the lesbian couple kissing, according to the New York Times.

A conservative group called One Million Moms found the kiss provocative. They published an online petition requesting that Hallmark remove the ad so that it didn't titillate them any further.

The group wrote as part of the petition: