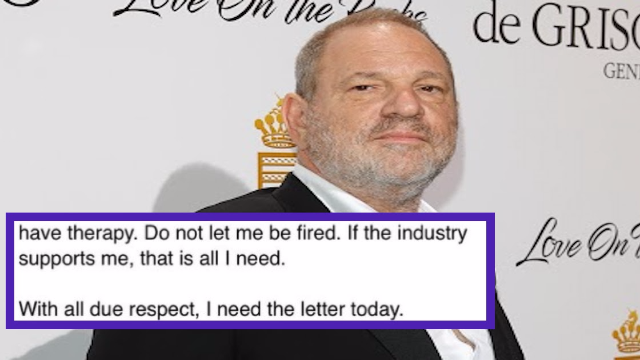 Harvey Weinstein reportedly sent out an email begging for his job. Then he was fired.

Just days after reports of his alleged sexual harassment hit the front page, Harvey Weinstein has been fired from his company. In a statement to the New York Times, Weinstein publicly acknowledged that his behavior — although he doesn't specify what behavior — "caused a lot of pain." But privately, he was apparently still fighting for his job. An email has leaked in which Weinstein begs for help.

Shared on Twitter by Janice Min, an owner of The Hollywood Reporter, the email plainly asks for help from industry power-players. "My board is thinking of firing me," he writes. "All I'm asking, is let me take a leave of absence and get into heavy therapy and counseling." He seems to be asking for time to rehabilitate his image as much as himself. "A lot of the allegations are false as you know but given therapy and counseling as other people have done, I think I'd be able to get there."