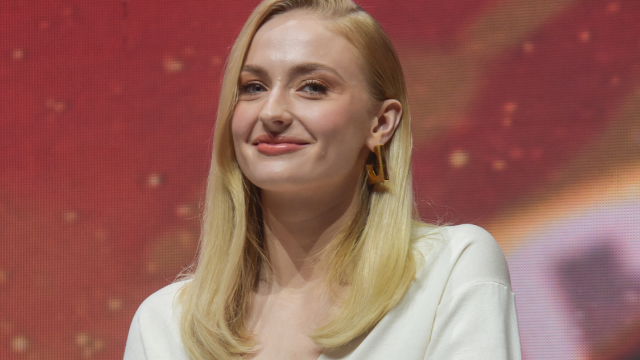 Jennifer Lawrence revealed a hilarious secret about Sophie Turner and her Juul.

Here's the thing: I would let Sophie Turner run me over with her car. Not only was she arguabley one of the only good parts of the final season of Game of Thrones, her social media presence is also so on point that the only way I can describe it is with a *chef's kiss.* And now that GoT is over, Turner has been making the rounds, doing live interviews to promote her most recent film, Dark Phoenix. To absolutely no one's surprise, Sophie is a dang delight in every interview, and almost always delivers a GIF-worthy line or moment during them. Like when she put her entire leg behind her head impromptu while on The Graham Norton Show, for example. Like I said, a. dang. delight.

Sophie's latest iconic moment comes from an interview on Jimmy Kimmel Live. The entire cast joined Jimmy Kimmel to talk about The Dark Phoenix, and Jennifer Lawrence revealed a hilarious secret. During a particularly emotional scene (this is a spoiler that is in the interview, fair warning), Jennifer Lawrence claims that Sophie Turner "gave the performance of the year," that was "so raw" because Sophie was legitimately crying due to the fact that her dialect coach had just taken away her Juul. L-o-l. Sophie confirms the claim by saying, "Yes, my vape," and then explains to the crowd that giving and taking away her Juul is how one learns to act either happy or sad for the camera. Brilliant. Bloody brilliant.