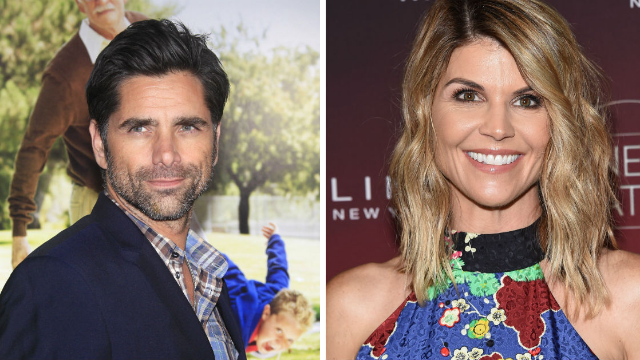 John Stamos weighs in on how 'Fuller House' will handle Aunt Becky leaving for prison.

The cast of "Fuller House" have mostly been keeping their feelings about the Lori Loughlin to themselves so far.

Considering both "Full House" and its Netflix sequel, "Fuller House" are arguably the most wholesome family sitcoms in history, a scandal is a particularly bad look.

When Loughlin and her husband (along with countless other celebrities and wealthy parents) were arrested for cheating their way into a spot for their daughter at University of Southern California, it severely tarnished Lori Loughlin's innocent Aunt Becky image. As details of the case emerged, it became more and more ridiculous to know that the woman Uncle Jesse has been singing to all these years was so committed to getting her academically embarrassing Instagram influencer daughter into college that she paid for photo-shopped crew team images. Can't wait for the twins to apply to college...

So far, Netflix and the cast have been cautious.

In the cast's first appear since the incident, they accepted an award at the Kids' Choice Awards and slyly alluded to the scandal by saying that a family sticks together "no matter what."

However, in a recent interview, John Stamos (Lori Loughlin's longtime TV husband) took a swing at a sly shout out of his own. First, he alludes to a possible "Full House" prequel series, but then it becomes clear he doesn't carry any ill will toward his co-star. Even if she did lie, cheat, photo-shop and use her wealth to give her unqualified daughter an unfair advantage...They're family! (Sort of).