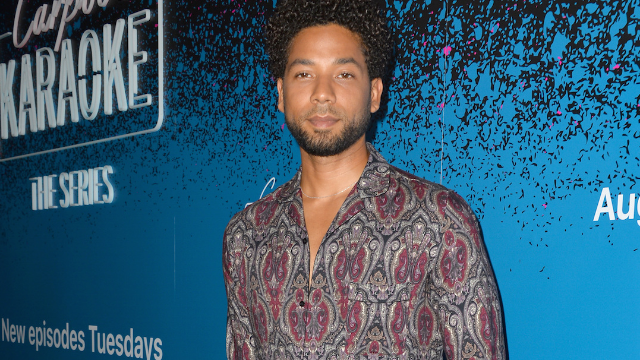 Just one week after Jussie Smollet was reportedly attacked in Chicago, the Empire star made his way back to the stage to perform and speak to his fans. Smollet directly addressed the assault at the concert, telling the audience, "I'm not fully healed yet. But I'm going to (be), and I'm gonna stand strong with y'all." He also clarified that he was bruised, but his ribs were not cracked and his doctors had cleared him to perform the concert.

As a refresher, Jussie Smollet was attacked by two men in masks, who yelled racial and homophobic slurs at him while beating him and telling him that he's in "MAGA country. "They also put a rope around his neck and poured an "unknown chemical substance" on Smollett during the attack.

During the concert, Smollet went on to say that he wasn't going to let his attackers win. "Above all, I fought the fuck back," he said to the crowd. He continued, "I don't even care to name any names. The hateful rhetoric that gets passed around, it has to stop. But guess what, it stops with the people that believe in love."