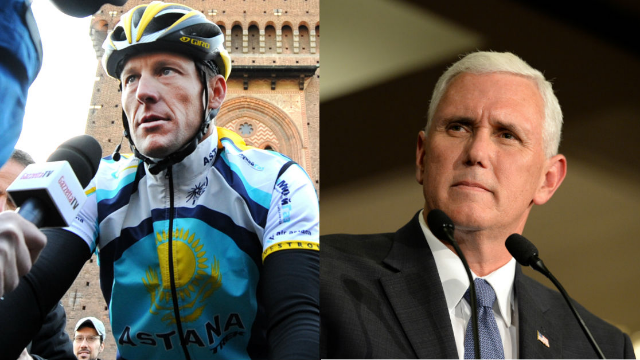 Lance Armstrong bragged about passing Mike Pence on a bike trail, so people brought up his 'doping.'

Lance Armstrong is getting roasted after tweeting about a chance encounter with Mike Pence over the weekend.

Armstrong, who used to professionally cycle, was stripped of his seven Tour de France titles and sued by the federal government and former cyclist Floyd Landis when it was revealed he'd been cheating with performance enhancing drugs for years.

While he no longer professionally cycles, Armstrong's years as an athlete at the top of his game place him light years beyond the average civilian when it comes to cycling stamina and ability.

So, when Armstrong tweeted about whizzing past Mike Pence on a bike path in Nantucket, he was met with a lot of eye rolls.

Pence was in Nantucket over the weekend for a fundraiser for the Republican National Committee that doubled up to raise funds for Donald Trump's 2020 presidential campaign.

I can’t drop many people on a bike these days but I just blew the fuckin’ doors off Mike Pence on a Nantucket bike path. Day. Made.