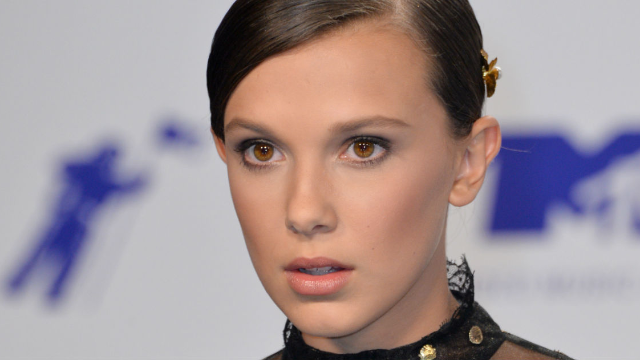 There are few feelings more intense than that of a junior high crush. You're just old enough to feel ALL of the feelings, but young enough that they completely flood and debilitate your brain.

While technically, Stranger Things actress Millie Bobby Brown has been exchanging back-and-forths with Internet personality Jacob Sartorius for quite some time, it wasn't until Friday that she confirmed the crush on Instagram.

For context, just last week Brown posted a photo of herself hugging a teddy bear with the caption, "Thanks for the bear."

Sartorius responded with a heart (ooh) and wrote an eloquent response that is perhaps too on-brand for a 15-year-old boy: "course."

There have also been vague social media musings from Sartorius that seem to reference a crush.

This either references the throes of a teen crush or it's a generic song quote. And really, why not both?!

stranger things fans waiting on him to just @ millie already

Given these other pieces of evidence, when Brown posted a selfie of the two of them in an Instagram story Frida, fans felt their crush theory was confirmed.

The picture was date marked for New Years Eve, which means the two young stars ushered in 2018 together.

Neither of the stars have publicly confirmed or denied their possible crush, but Twitter has been hard at work speculating.

Again, it's important to remember they are children and should be allowed to have crushes and grow up like the rest of us.

hey everybody friendly reminder that millie bobby brown and jacob sartorius are children. remember your relationships in middle school, now imagine if that was broadcasted to the world...

my biggest takeaway from the Millie Bobby Brown and Jacob Sartorious situation is: can you imagine being a full grown adult and sending hate to a 13 year old girl because you don't like her 15 year old boyfriend

Hopefully, they are able to enjoy the pure joys of crush hood in relative peace.