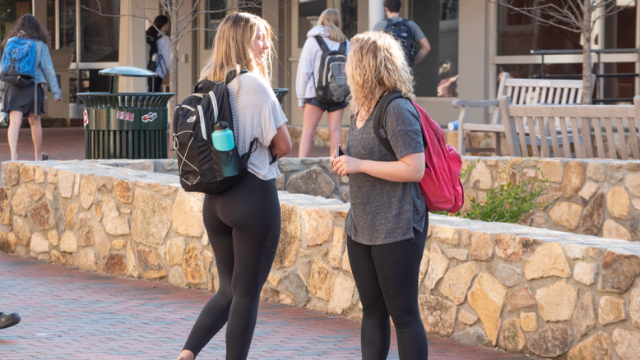 College students clap back with 'Leggings Day' after mom says they lead to sin.

For millennia, people have opted to tell women what to wear rather than tell men to control their boners, but this generation isn't afraid to fight back.

Female students are protesting sexist dress codes in their middle schools and high schools and now, the bullsh*t has officially been admitted to college! (Paging Aunt Becky.)

A Catholic mom named Maryann White attended a Mass on campus, and was absolutely AGHAST that the women were strutting about in tight pants like FLOOZIES, she wrote a letter to the editor to the student newspaper begging women to put on thicker bottoms.

"I was ashamed for the young women at Mass. I thought of all the other men around and behind us who couldn’t help but see their behinds," she wrote. "Leggings are so naked, so form fitting, so exposing. Could you think of the mothers of sons the next time you go shopping and consider choosing jeans instead? Let Notre Dame girls be the first to turn their backs(ides) on leggings." (Emphasis mine.)