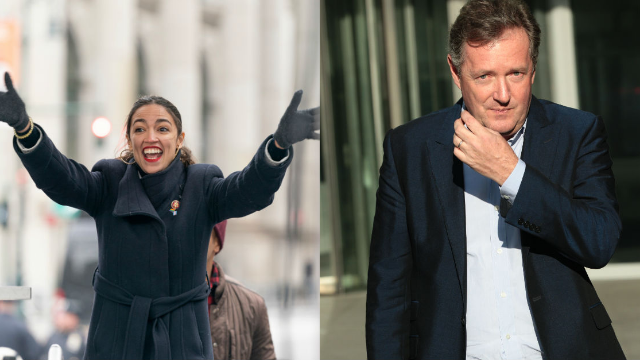 Piers Morgan got dragged when he claimed Ivanka Trump is more qualified than 'bartender' AOC.

Piers Morgan tried to come for Alexandria Ocasio-Cortez over the weekend, and unsurprisingly to anyone who pays attention to her social media presence, it immediately backfired.

Morgan's attempted diss came on the heels of a viral clip of Ivanka Trump. In the clip, Ivanka is seen trying to edge her way into a conversation between Emmanuel Macron and Theresa May at the G20 summit. The clip of Ivanka trying to wedge herself in feels particularly awkward and on-the-nose given the fact that she only works at the White House because her father is president.

When Congresswoman Ocasio-Cortez critiqued the clip of Ivanka, and what it says about political nepotism, Morgan decided to swoop in with a low blow.

It may be shocking to some, but being someone’s daughter actually isn’t a career qualification.

It hurts our diplomatic standing when the President phones it in & the world moves on.

The US needs our President working the G20. Bringing a qualified diplomat couldn’t hurt either. https://t.co/KCZMXJ8FD9