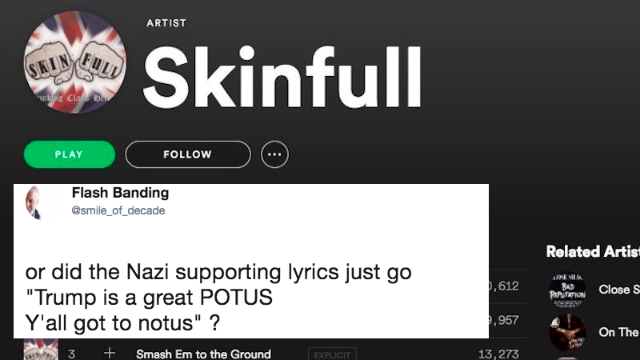 Spotify called out for hosting Nazi music on their site. They acted fast.

Spotify is proving that everyone, no matter who you are or what you do, can take action in the fight against neo-Nazis and white supremacists. The streaming music company has banned music by hate groups. It's a big step in refusing to normalize these views.

On Monday, Digital Music News published a report highlighting 37 white supremacist bands that were currently available on Spotify. The Southern Poverty Law Center had attempted to call attention to the hate-mongering music back in 2014, when they highlighted the bands' appearance on iTunes. The list included bands with names like "Kill, Baby… Kill!", "Battlecry" and "Blood Red Eagle." In response, on the heels of a violent racism-fueled weekend in Charlottesville, the company acted fast to remove the groups.

Speaking to VICE, the company released a statement revealing that it “takes immediate action to remove any such material as soon as it has been brought to our attention.” Similar to the business leaders resigning from Trump's panels and the aides attempting to distance themselves from the administration, the move speaks volumes.