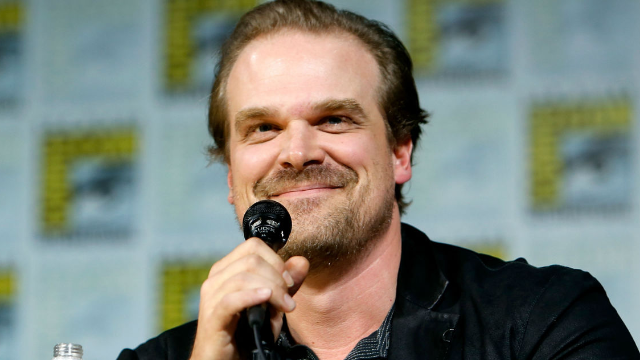 If you've fallen in love by Jim Hopper's soft heart (hidden by a rough exterior) on Stranger Things, then you'll be even happier to know that the actor David Harbour is just as sweet in person.

On Friday, Harbour took to Instagram to prove that he made good on a Twitter bet with a fan. It all started when California-based high school named Damaris Fregoso asked Harbour on Twitter how many retweets it would take for him to pose in her senior photo.

Much to her surprise, Harbour answered and even added a few specific requests in good faith that she'd reach her goal.

.@DavidKHarbour how many retweets for you take my senior photos with me

25k. And I get to wear the school sweatshirt and hold a trombone. https://t.co/xPNEE681J4

Fregoso's Twitter bid quickly soared and she reached over 28,000 retweets as of Friday.

I wanna thank everyone from the bottom of my heart! None of this would've happened w/o y'all. Y'all are gonna make my senior photos 💣.com

Being a man of his word, Harbour noted the successful tweet and went forward to make arrangements for the photos.

He even quoted Eleven in the process.

Holy hell, internet. How can you be in favor of this? Friends don’t lie. @posttdamaris DM me... https://t.co/xPNEE681J4

my family keeps saying it's the "big day" haha

On Friday, after months of suspense, Harbour and Damaris finally shared their spirited photos with the public.

As you can see in the photos, Harbor's stipulations for a trombone and high school sweatshirt were met.

Voted most likely to hijack someone’s high school senior photos 24 years later. Many thanks to @postydamaris and her kind family and @iamtommyg photography for making a dream come true and proving my high school classmates right!!

Damaris and her whole family met up with Harbour at the Netflix headquarters in Los Angeles for the photo shoot.

"Well this is certainly something I didn’t think would actually happen! David is such a sweet dude! Even my 5 month old nephew got in on the action, haha! Can’t wait to share the photos soon!!!”

The photos are so pure and they look like they're having so much fun.

Damaris' Twitter followers were overjoyed by the glowing success.

oh i forgot to say yesterday david was playing the trombone and i gave that an A, little rough but well played! 😂

oh i forgot to say yesterday david was playing the trombone and i gave that an A, little rough but well played! 😂

I don’t always take senoir portraits, but when I do, it’s because @postydamaris gets 25k+ retweets and @DavidKHarbour agrees to take them with her as long as he is allowed to hold a trombone. 😂 pic.twitter.com/XTmYjrvm9r

so great when an actor is even more awesome than the beloved character he portrays! Love this story, the show, whole ensemble is great! ❤️

It'll be hard for her classmates to compete with this series of yearbook photos.