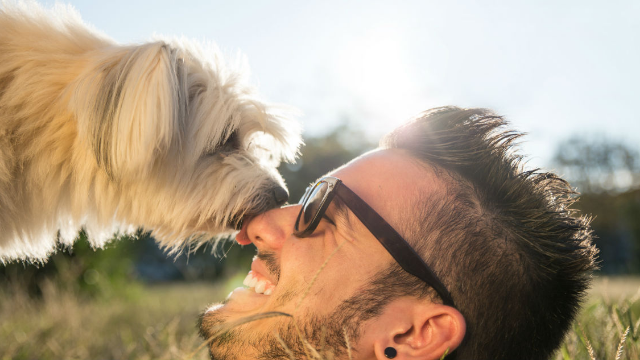 This man called off his wedding because of his dog. Now he's worried he's an a**hole.

Dog lovers get ready to stress out, this story is almost as much of an emotional journey as "A Dog's Purpose."

While we usually hear about engagements breaking off because of cold feet, cheating, evil mother-in-laws or bridezilla/groomzilla nightmares terrorizing the plans, this situation is definitely different. When a Reddit user and obvious dog enthusiast, "mydogisgod0" posted on AITA (Am I The Asshole), the internet was incredibly conflicted.

Me (28M) and fiancee (27F) have been together for 4 years, engaged for 6 months. I also have a 7 year-old lab mix who is the greatest dog in existence.

On Saturday, fiancee had a bachelorette party at home. I stayed with my parents but I left the dog with her because she likes having him there. However, I made sure to tell her to put the dog in our bedroom once the party gets going.

5am on Sunday I get a frantic call that something's wrong with the dog. She was drunk, so I told her to get a taxi and go to the emergency vet clinic. When I got there, she looked like she hadn't stopped crying for hours and she couldn't even speak. Two of her friends were there so they told me my dog is alive but not well. I felt sorry for her for an entire 10 minutes while waiting for the doctor.

But then, the doctor told me my dog ingested large amounts of alcohol and chocolate edibles. The girls apparently thought it would be cool to leave everything out on short coffee tables, leave the dog to wander around instead of putting him in our bedroom, and then get wasted and not notice he was going to town with the booze and edibles.

When we got home, I told my fiancee to pack and get out of my house and my life. I told her to tell her guests the wedding is off, and I'll tell mine. She was shocked, but she took her things and left.

2 hours later, I get bombarded by messages on Messenger, Whatsapp, by her sisters, brother, brother's wife, her mom, her friends, telling me that I am insane to do this to her after 4 years. They started off defending her, but it quickly turned into insulting me.

The logical thing for me to do was look for comfort in my friends and family. Nope. They all fucking agree. My mom said: "Well, it was a mistake, she didn't do it on purpose, besides - the dog didn't die!" Lucky me, eh? My dog didn't fucking die!

My sister was appalled that I canceled the wedding "over that?!" and even my best man said I might have overreacted. Yes, our relationship has had ups and downs, but it's mostly worked fine. But I am so disgusted at my fiancee that I can't even imagine looking her in the eye, let alone spending my whole life with her. She isn't fucking 17, she is 27!

By the way, this is not the first dumb thing she has done. She likes to text while driving, she always leaves stuff on the electric stove (like kitchen towels, the cutting board etc.) even though she has turned on the wrong burner and burnt whatever was on it several times in the past, and similar DANGEROUS things. It's not something I hold against her in the sense that I would ever mention in a fight, but I'd be lying if I said I wasn't worried that she might end up killing herself or someone else. For example, my dog.

I'm 99% sure I will stand by my decision. But am I really an asshole? Literally nobody is on my side and I have no idea what to think.