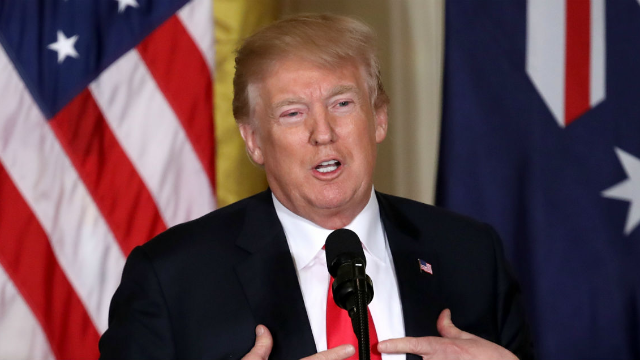 The ‘Trumpy Bear’ is a real thing and it’s getting mauled by the internet.

When it comes to the ongoing traumatization of America, 2018 won't quit! One of the current spectacles traumatizing citizens across the land is the full-length deeply psychologically scarring advertisement for Trumpy Bear.

For those unacquainted with this furry terror, Trumpy bear can be purchased with two simple payments of $19.95, wears the president's trademark toupee and tie, keeps an American flag in his bear booty, and fully looks like he spies on your in your sleep for NSA.

While the bear, and his accompanying advertisement (some would dub it a short horror film) has existed since 2017, Fox News just started airing the advertisement this week! This fresh wave of exposure has made Trumpy Bear the talk of the town, and by "the talk of the town" I mean thousands of people are mystified at the unironic nature of this bonkers ad.