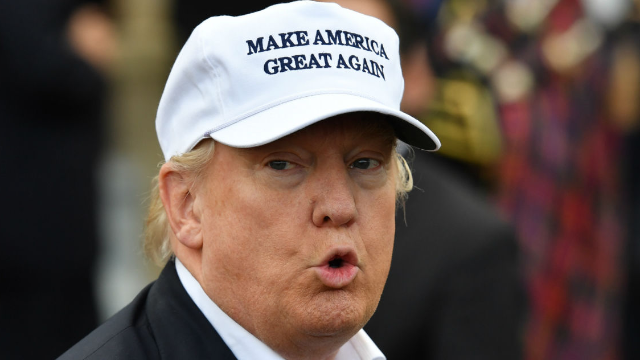 Trump claims the government shutdown is 'a nice present' from Democrats.

A temporary government shutdown started at midnight on Friday, and it took less than seven hours for Trump to blame Democrats.

The shutdown took place after Senate Republicans failed to gather enough votes to put a 30-day funding bill in motion. The final vote on the procedural motion toppled at 50-49, but 60 votes were needed to advance the bill. While Republicans are the majority, five GOP Senators including Mitch McConell voted against the bill.

Nonetheless, the president's blaming gaze has been firmly set up on Democrats, many of whom said they wouldn't vote for a bipartisan bill unless it fixed the Deferred Action for Childhood Arrivals program (which Trump decided to end).

Early in the morning on Saturday, Trump tweeted about how Democrats prioritize "illegal immigrants" over the military.

He also claimed there need to be more seated Republicans, which is a bold assertion since the GOP currently holds the overall majority.