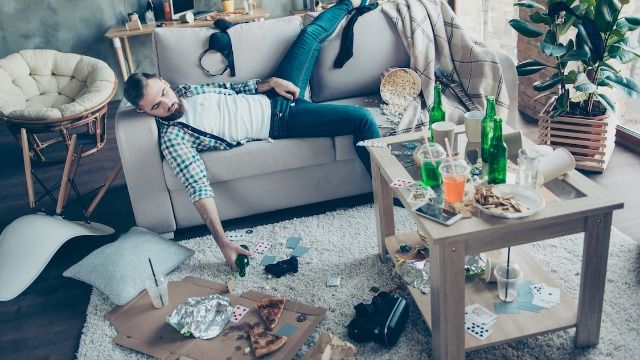 While we all have different expectations when it comes to how clean we prefer to keep our homes, expecting a family member or romantic partner to constantly clean up the half-eaten pizza you left on the living room floor is rude and disrespectful...

Many couples come up with a solution to dividing up household chores that works for both of their preferences and schedules, but if one person is consistently picking up after their partner, tensions can brew into a nasty explosion. Leaving food out in the kitchen, spills on the floor, or trash everywhere in the house is a not-so-subtle signal that you expect someone else to clean up after you. Trash doesn't magically disappear on its own and a truly filthy house can often lead to a string of other nightmares such as a rodent or insect infestation, allergies, or health problems.

So, when a rightfully frustrated girlfriend decided to consult the courtroom of moral philosophy otherwise known as Reddit's "Am I the as*hole?" about her boyfriend's impressively disgusting, perplexing and lazy cleaning habits, people were eager to offer their advice.

AITA (Am I the as*hole) for making and sending a step-by-step video on how to put trash IN the in bin to my boyfriend?

My boyfriend and I have lived together for 5 years, and he is honestly the messiest person I know, which is really saying something because my parents were hoarders. If he finishes a drink, he'll leave the empty can on the floor. If he cooks dinner, he'll leave the packaging, splatters and leftover food on the bench until I discover it some time later. If he spills something, he just throws half a roll of paper towel on the top and calls it a done job without actually cleaning it, meaning when I find it I usually slip and fall on it, and then have to clean it myself. I went away for a week to a funeral in another state, and I came back to find rotting raw chicken on the floor because he bought it and forgot to put it in the fridge. You get the idea.