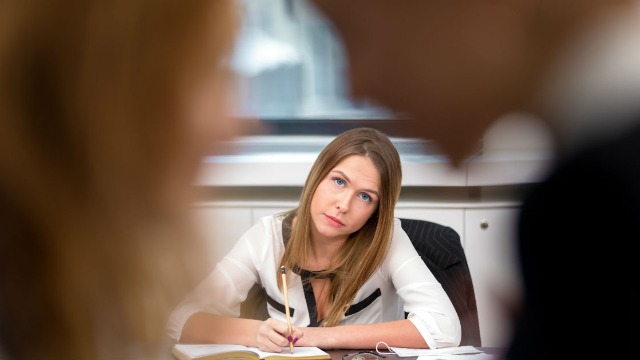 Woman asks if she was wrong to not tell co-worker she reads lips after she caught her talking about her.

Office politics can sometimes feel like a teen drama where people gossip at the lunch table and everyone knows each other's secrets in a matter of minutes.

While the goal of an office is to provide a productive work environment, people who spend over forty hours a week together are bound to sometimes clash in personality, opinion, or how many drinks to chug at the holiday party. However, it is never ok to take advantage of someone's disability or to talk badly about someone behind their back regardless of whether or not you work together. Everyone in an office is entitled to a safe and healthy workplace and sometimes an awkward confrontation is the best solution to a personal problem.

So, when a recent Reddit user with hearing loss consulted the internet's moral compass (Am I the As*hole) to ask about a conflict with a co-worker who didn't know she could read lips, people were quick to weigh in on the issue...

AITA (Am I the As*hole?) for not telling someone I can read lips?

I've had hearing loss for most of my life , but it was diagnosed when I was about 7 years old. So I learned to read lips at the same time I was learning to speak. I'm very proficient in reading lips.

Whenever I work with someone new, I make sure to let them know that I have hearing loss and to make sure that they are facing me and I'm aware they're talking to me.

I've never actually mentioned to any co-workers that I could read lips & but I'm pretty sure most of them at least suspect it strongly.

A new co-worker started and I did my customary introduction and disclaimer about my hearing.

I don't think she believed me because she got very offended when I ignored her. The problem being she was trying to get my attention from behind me and I genuinely did not hear her. Once someone got my attention I apologize to her and pointed out that I did have hearing loss and I wasn't aware that she was talking to me.

A few days later she was venting to a mutual coworker. The only problem was she was facing me and I could read her lips perfectly.

After a few minutes I approached her and let her know that if she was going to s*** talk someone she needed to make sure they couldn't understand her and that I was reading her lips the entire time.

I told her I was upset that she wouldn't just come to me, and that I did tell her twice that I was partially deaf and couldn't hear her. She freaked out because apparently I was being rude by reading her lips when she was facing me