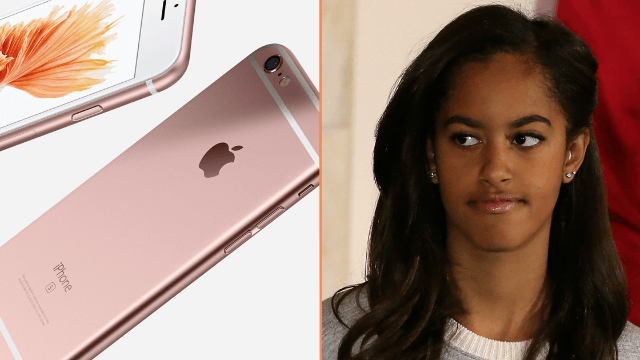 Normal teen Malia Obama is such a normal teen that she lost her iPhone over the weekend.

However, she's also a not-normal teen, because getting your iPhone replaced when you're basically American royalty is not as simple as it is for us normals.

As reported by Page Six, Malia attended the Lollapalooza music festival in Chicago this past weekend (this was not her first time). Dancing a little too hard apparently caused her to misplace her phone, so she headed to an Apple Store in Chicago to get a new one. Secret Service detail accompanied her to the store (wonder if they had fun at Lollapalooza!) where Malia faced a small bump in the road: She didn't know her Apple ID and password, because someone at the White House had created them (likely for security reasons).

A witness told Page Six, "Malia came into the Apple Store to get her iPhone replaced, but things didn't go exactly [as planned]. The Apple Store couldn't immediately help her because she didn't have the Apple ID or the password for the missing phone, since the White House set it up." Haha, so relatable!

We can just imagine Michelle Obama's reaction when she got that phone call.

And Barack probably made a dad joke or said something like this:

Malia Obama heads off to Harvard in less than a month, so she has just enough time to hit up all the now-unemployed Obama administration White House staffers who probably have her personal information still floating around their brains. Here's hoping our crumbling democracy hasn't caused them to forget it all.