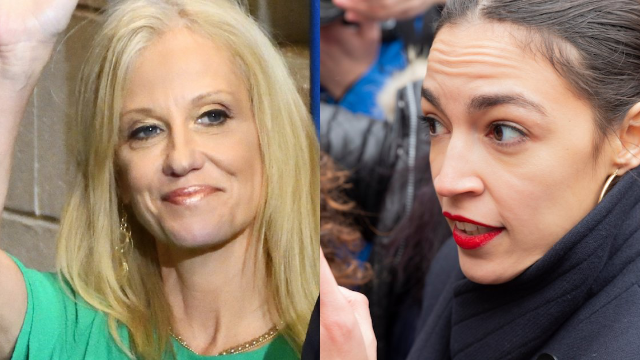 Alexandria Ocasio-Cortez manages to take on the biggest evil-doers in government at her day job, while still finding the time and energy to slay evil-doers on Twitter after-hours. The Congresswoman didn't earn superhero status for nought, and there seem to be no limits to what she's capable of. It's clearly a bad decision to come for her—but if there's one thing Trump and his cronies are known for, it's bad decisions!

Recently, Trump's crusty lie-trumpet Kellyanne Conway was speaking to CNN's Jake Tapper where she was defending Trump's racist "very fine people on both sides" comment from 2017. That's a tricky one to defend, much like all his other comments. So the White House counselor employed one of the MAGA camp's favorite deflection tactics: slamming AOC. "I see officials who get a lot of airtime and ink, like Alexandria Ocasio-Cortez, congresswoman, who tweets many times about the mosque but never once about Sri Lanka​," she said.