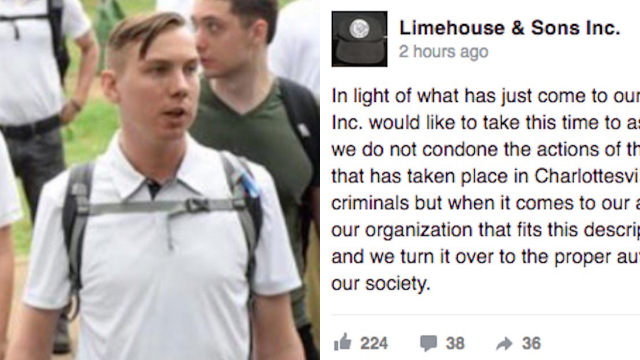 Another Nazi protester has been named, shamed and fired. Good work, internet.

Yet another Nazi who participated in the tiki-torch lit "Unite the Right" (read: NAZI) rally in Charlottesville, Virginia, over the weekend, was fired today. This makes him the second Nazi of the day, that we know of, to lose his job as a result of exposure from the rally. Let's keep that number rising!!!

Twitter has been at work ever since the weekend trying to name, and shame, the people photographed marching on the UVA campus on Saturday night, some of whom were wearing swastikas and chanting racist phrases like "white lives matter" and "the Jews will not replace us."

One of them was Nigel Krofta, a white supremacist from Ridgeville, South Carolina, who was photographed at the rally standing next to James Alex Fields Jr., the man accused of murdering counter-protester Heather Heyer with his car.