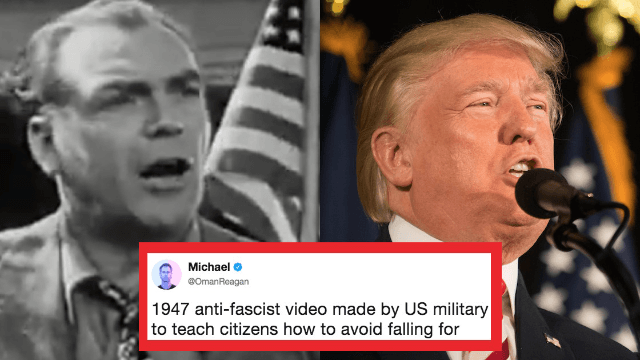 This anti-Nazi warning video from 1947 is going viral because it looks eerily familiar.

It's 2017 and our President took three whole days to explicitly condemn a white supremacist/Nazi rally in Charlottesville, Virginia over the weekend, where one person was murdered and dozens were injured. By NAZIS. Now a video is making the rounds on Twitter and Facebook warning the public about fascist dictators. The video was first released in 1947, shortly after WWII. And yet, it's terrifyingly relevant today.

The clip was posted over the weekend by anthropologist Michael Oman-Reagan, who says the video, titled "Don't Be a Sucker," was made "to teach citizens how to avoid falling for people like Trump." It's since been retweeted nearly 150,000 times.