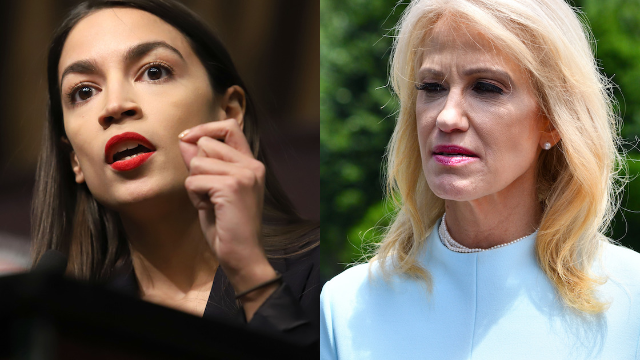 AOC rips in to Kellyanne Conway for mocking her 'meow moment' with Nancy Pelosi.

Women perpetuating sexism is a tale as old as time. Look no further than the 53% of white women who voted for Trump in 2016, and every woman who's ever described herself as "more of a guys' girl." I mean, you do you, honey. But if you're ruling out an entire gender that makes up more than half the human race, you might want to do some soul-searching. At the forefront of the women-hating-women movement is White House counselor Kellyanne Conway.

“Those four female Democrats that Nancy Pelosi is brushing back, I think they are all freshman members,” said Conway on (surprise!) Fox News. “A major ‘meow moment’ — brushing back in a huge catfight, really ridiculing them — and they voted against the Democratic aid package.”