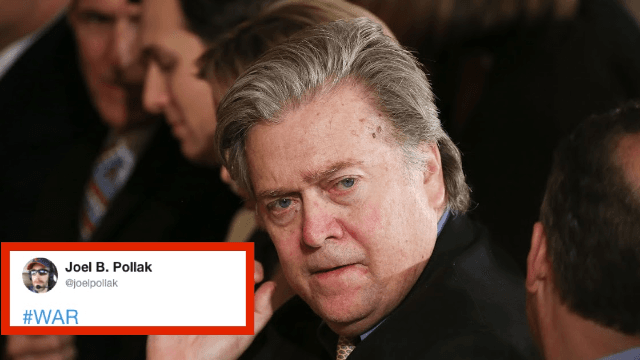 Breitbart editor declares #WAR on Twitter, gets hilariously trolled instead.

The world was gifted today with the news that Steve Bannon, Donald Trump's chief strategist, SNL's grim reaper, and white nationalists' beloved head potato, has been shown the door. We'll let everyone celebrate this news as they see fit; perhaps you have a rotten troll doll you could symbolically bury or a clarifying face mask to use in Bannon's honor.

For Joel Pollak, senior editor-at-large for Breitbart and former colleague of Bannon's, the dismissal seems to mean one thing: #WAR.

Fortunately, Twitter is here to troll Pollack with a Temptations song. First responders got to the tweet fast enough to get through the whole first verse of "War, What Is It Good For?"