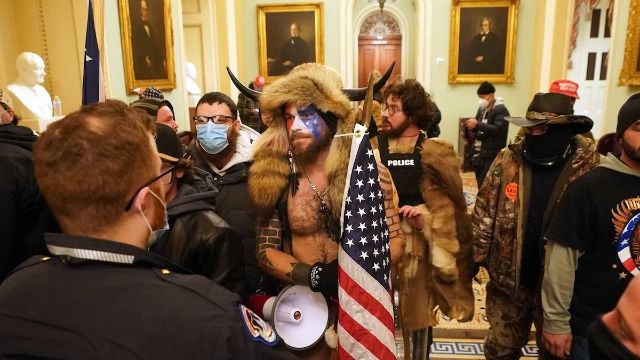 People react to Capitol Hill rioter refusing to eat jail food because it's 'not organic.'

Many of the rioters who stormed and occupied the U.S. Capitol last week are now facing consequences for their actions, from losing their jobs to getting kicked off of flights to jail time. And they're not happy about it.

Among those currently experiencing due process for their role in the riots is Jacob Chansley, AKA Jake Angeli, the headdress-wearing Arizona man now best known as "not Jamiroquai" according to Jamiroquia.

33-year-old Chansley, also known "the QAnon Shaman," turned himself in to the FBI over the weekend after returning from D.C., ABC reports. He is now being held in jail and facing two federal misdemeanor charges for "knowingly entering or remaining in any restricted building or grounds without lawful authority and violent entry and disorderly conduct on Capitol grounds."