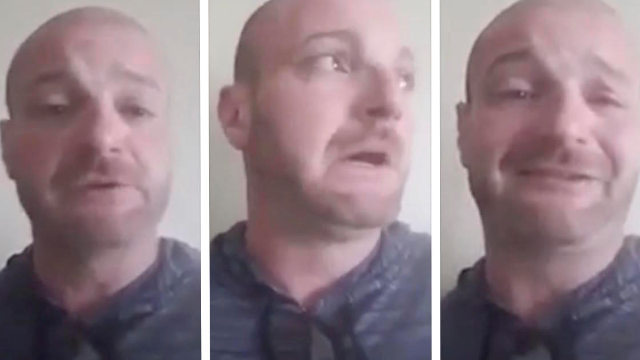 Watch this Nazi who was 'ready for violence' cry when he finds out he might be arrested.

White nationalist Christopher Cantwell seemed very pro-violence at this past weekend's KKK, neo-Nazi, and white supremacist rallies in Charlottesville, VA, but he changed his tune drastically when he found out there might be a warrant for his arrest. On Tuesday, he filmed himself scared, sniffling, and actually crying while swearing that he never even wanted there to be violence at the rally in the first place. Hmmm, such a strange and sudden about-face.

If you watched the Vice News footage of the Charlottesville ralliles, Christopher Cantwell will be a familiar face. He was the super macho guy who, while spewing the most racist and anti-Semitic garbage you could imagine, told Vice correspondent Elle Reeve just how into violence he was. He showed her his guns (actual weapons, not his biceps) and said, “I'm carrying a pistol, I go to the gym all the time, I'm trying to make myself more capable of violence."