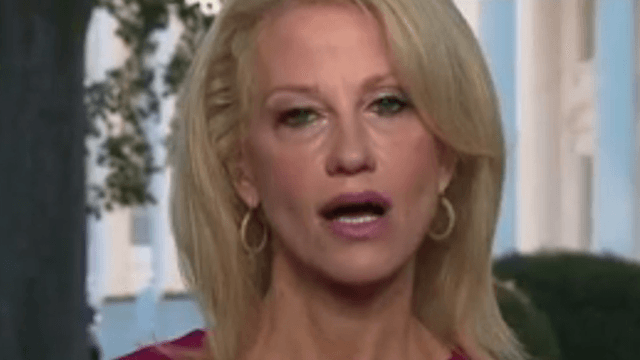 In a two minute exchange that is peak Kellyanne Conway, the Counselor to the President took the opportunity to blame Obama, Hillary, and the media's "obsession" with the Russia scandal for the gun violence epidemic in the United States.

While meeting survivors and first responders at a Las Vegas hospital, Trump was asked about gun control, and said, "we're not going to talk about that today." So Conway said that the problem's on Democrats for not tweeting about gun control earlier.

Kellyanne Conway: "The Second Amendment is a bedrock principle of our Constitution ... that should be protected" https://t.co/6HTYQA9nG3

"You will see that this conversation isn’t being had until tragedies like this strike by those who try to be the loudest voices. You see Hillary Clinton, who’s out on a book tour, talking about herself, not talking about this," Conway said. "You see her rushing to judgement on Twitter the other day while people are still looking through the rubble, searching through the hospitals for their missing loved ones, trying to politicize it."