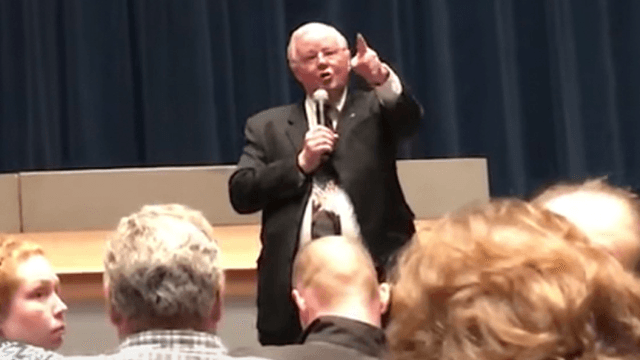 GOP Congressman Joe Barton to concerned citizen at a town hall: 'Shut up.'

Over the weekend, a Republican congressman held a town hall—a scary proposition for Republicans these days—for his constituents in Texas, according to Dallas News. At one point, a man pointed out Rep. Joe Barton's shoddy voting record on protecting women from violence.

For background, Joe Barton voted against reauthorizing the Violence Against Women Act in 2013. So Joe Barton's constituent wanted a promise that his congressman would work with Congresswoman Jackie Speier—presumably to pass her bill that would "require transcript notation for students who violate [their] school's policy concerning sexual assault."

But if you've been watching the news lately, you know what happened next. Town halls don't make the news for their well-crafted signage.