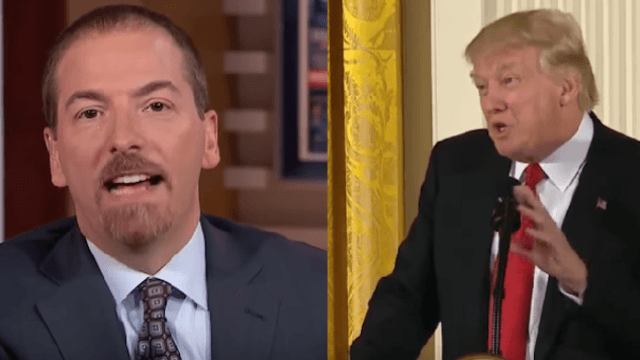 Why does Donald Trump keep saying that 'Meet the Press' host Chuck Todd has 'Sleepy Eyes'?

Throughout his campaign, and well into the first awful months of his administration, President Trump has made a point of giving people he doesn't like unflattering nicknames. There was Little Marco and Lyin' Ted, of course, and, most famously, Crooked Hillary—all monikers that seemed to stick.

But today, Trump's traditional angry Saturday morning tweet fell back on probably his weakest slam. He wanted to attack Meet the Press host Chuck Todd for talking about his troubling connections to Russia and claiming on MSNBC Friday that Trump was on the verge of a "temporary lame duck presidency." So he called him... "Sleepy Eyes"?

When will Sleepy Eyes Chuck Todd and @NBCNews start talking about the Obama SURVEILLANCE SCANDAL and stop with the Fake Trump/Russia story?

That's just weird. It kinda sounds like something you'd call your kid when they don't want to get up for school in the morning? But also vaguely romantic? Like he's got a crush? And the weird thing is, Trump has been using this dig for years.