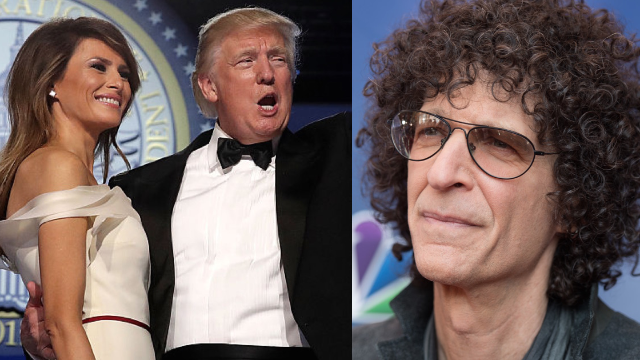 An anonymous hero just dumped the entirety of Donald Trump's radio banter with Howard Stern, opening a Pandora's Box of 15 (FIFTEEN!) hours of crude conversations between the now-president and the shock jock.

In a series of interviews between 1993 and 2015, Trump predictably said disgusting things about women, like letting Stern call his daughter Ivanka a "hot piece of ass" and in some newly released recording, talked about seeking the "right price" for his wife Melania Trump and groping her in public.

Here's how Trump describes his meet-cute with the now First Lady in an interview on November 11, 1999, transcribed by Factba.se.

Stern: Have you ever felt her up in public?

Stern: How did you meet this supermodel?

Trump: I met her at a very big party in New York. And she was there along with other supermodels, and I greeted all of them, and I said, that's the one that's the most beautiful.

Trump: And she is considered beautiful by the other girls. I mean they, she's really considered most beautiful, but she's beyond beauty, she's a very nice person.

Stern: And you got stank on your hangover the first night?

Trump: I didn't do well with her the first time.