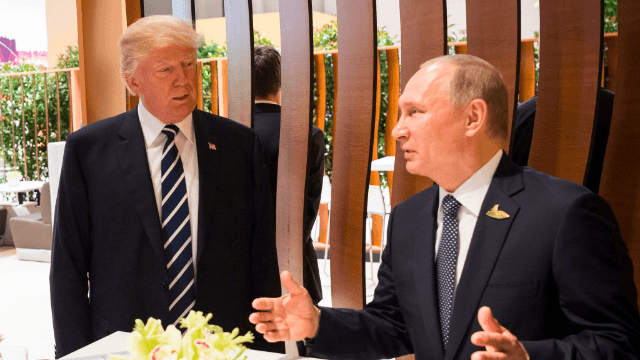 Donald Trump is pretty sure Putin was actually on Team Clinton the whole time.

Donald Trump had his very first non-Fox News interview since he's been elected today, with none other than seminal journalist, the 700 Club's Pat Robertson, on the Christian Broadcasting Network.

You know, this guy.

The guy who is pretty sure that any clothes you buy from Goodwill could be infected with demons. Him. That's the guy who gets to interview the President of the United States. CNN is fake news and a guy who claims that Facebook witches are coming for your babies is legit, because everything is ridiculous now and nothing matters anymore.

While the interview won't air until Thursday afternoon, an exciting tidbit has already been released to the general public. The fact that at some point in the interview, Donald Trump says that he actually thinks that Vladmir Putin actually would have preferred that Hillary Clinton be president. Which I guess means that it is straight up unpossible that Russia interfered with our elections in hopes of getting Donald Trump elected to office! Ha! Gotcha!