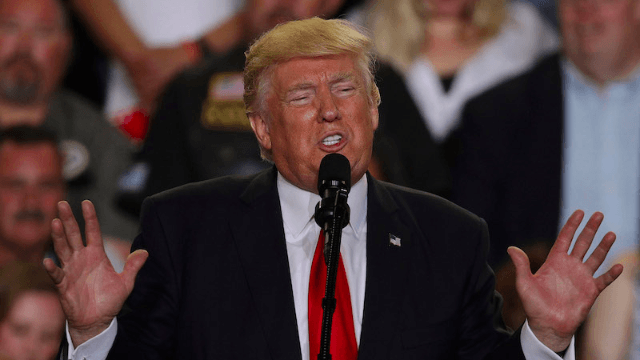 Behold these glorious photos of empty seats at Trump's rally he says broke the arena's "all time record."

While the White House Correspondents' Dinner was taking place on Saturday with nary a member of the President's family present, Trump was in Harrisburg, Penn., speaking at a campaign-style rally in which he slammed the mainstream media and made sure to comment on the size of the crowd. And sure, there was a decent number of people present, but as journalist Jonathan Tamari, a Washington correspondent for the Philly Inquirer, pointed out on Twitter, Trump just had to act like it was a bigger crowd than it was.

Trump says "we have a lot of ppl standing outside" and he "broke the all time record" in this arena. There are rows of empty seats here pic.twitter.com/ixbErKjrQu

"Large and loud but not quite capacity crowd as Pence arrives," Tamari notes. "Several rows open at top of arena, and some space on the floor."

Large and loud but not quite capacity crowd as Pence arrives. Several rows open at top of arena, and some space on the floor pic.twitter.com/tHVdlGNAcT