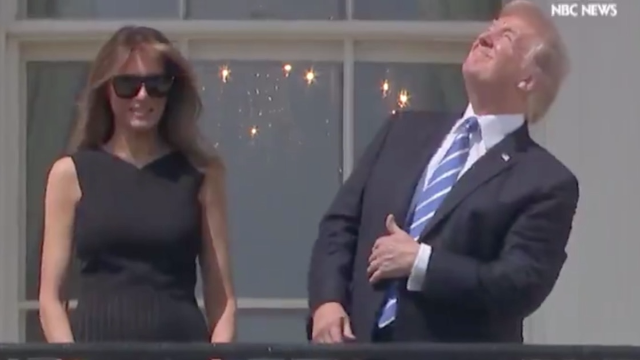 On Monday, millions of Americans had their eyes to the sky as the United States experienced a rare solar eclipse. Among those Americans were president Donald Trump, first lady Melania Trump, and their son Barron, who watched the eclipse from the Truman Balcony at the White House.

See if you can spot the problem with the way the president chose to view the solar eclipse.

Someone shouts "don't look" as Pres. Trump looks up without eclipse glasses on as solar eclipse passes over D.C. https://t.co/5ft70fm30R pic.twitter.com/0lAkuzF9RZ

Yep, just stared directly at it BEFORE putting on his approved eclipse safety glasses. Now, we've all been hearing the safety warnings over the last few weeks and probably are well-aware that staring directly into the sun during an eclipse can cause permanent eye damage.