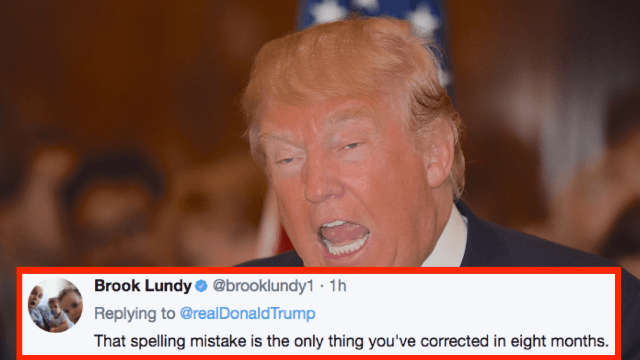 Donald Trump woke up this morning, cracked his knuckles firsthand, and got to tweeting. He started off nice and easy, with a tweet about the havoc Hurricane Harvey has wreaked on Texas, containing a misspelling of "healing" (again!), and still no condolences or sympathy for the victims. A+ tweet.

Trump mentioned that he's going back to Texas, which seems useless considering he didn't do anything the first time he visited, other than brag about crowd size and say he witnessed Harvey's destruction "firsthand." (Ron Howard voice: "He didn't.")

Next, Trump made a hard turn and tweeted about former FBI head James Comey supposedly exonerating Hillary Clinton ("But her emails!") before the investigation was actually over.