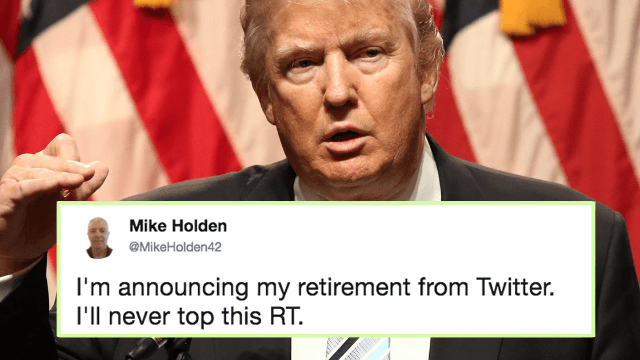 Donald Trump woke up and accidentally retweeted a random guy calling him a fascist. Oops.

Donald Trump had a busy Tuesday morning. He woke up, brushed off his Twitter fingers with a feather duster, and retweeted a man calling him a fascist.

"He's a fascist, so not unusual," wrote a man named Mike Holden, a guy without the blue check of verification on his account, a guy with 831 followers, who is now most notable for getting Donald Trump to call himself a fascist.

Holden's tweet was itself a reply to a Trump retweet of a "Fox & Friends" article, announcing the president's possible pardon for "ex-Sheifff Joe Arpaio." Arpaio has been charged with "criminal contempt" for refusing to "stop detaining people because he merely suspected them of being undocumented immigrants."