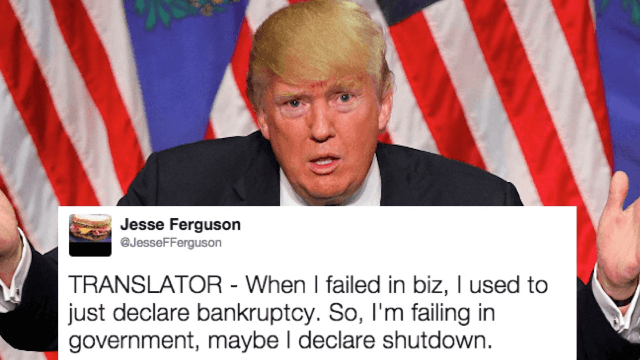 Donald Trump straight up called for a government shutdown in his morning Twitter tantrum.

President Donald Trump, with his invaluable business acumen and heart with the thousands of citizens who depend on government services, says what the country needs is a good ol' shutdown.

Responding as if he is just learning about Senate rules for the first time—which couldn't POSSIBLY be the case—Adult Man President Donald Trump thinks the way to passing his agenda isn't by working on bipartisanship but to just get to 60 Republicans or shut the whole damn thing down.

The reason for the plan negotiated between the Republicans and Democrats is that we need 60 votes in the Senate which are not there! We....

either elect more Republican Senators in 2018 or change the rules now to 51%. Our country needs a good "shutdown" in September to fix mess!