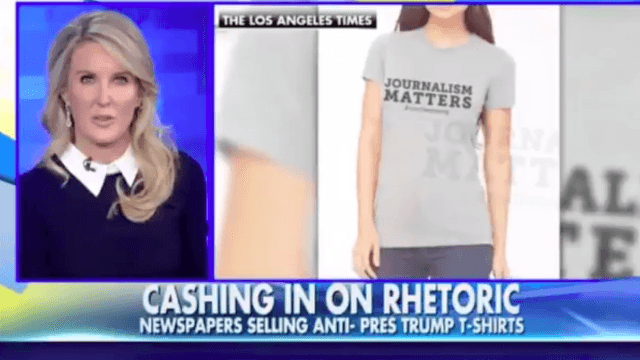 Multiple newspapers have been accused by Fox News of bias for sending the message that journalism is a good thing. Fox & Friends slammed newspapers on Tuesday for selling T-shirts with pro-journalism sentiments that the program claims are "anti-Trump rhetoric."

The T-shirts don't mention the president at all, and yet, according to this Fox & Friends host, they're an example of "media bias on full display." The host says:

Newspapers now cashing in on t-shirts splashed with anti-President Trump rhetoric. The Washington Post offering this shirt which says 'Democracy Dies in Darkness,' The L.A. Times selling shirts that say 'Journalism Matters,' and the Chicago Tribune's feature 'Speaking truth to power since 1847.'