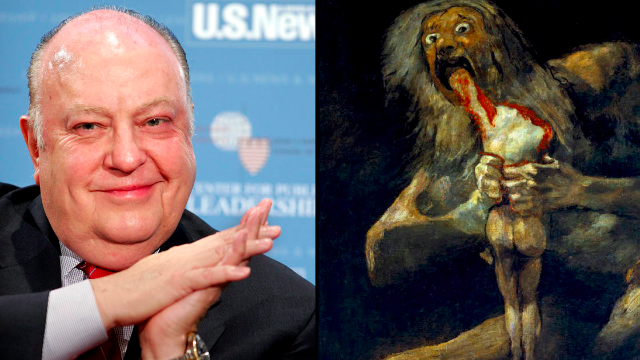 In case your day wasn't stressful enough, you can now visit a museum devoted to Fox News-inspired art.

Yours mine & ours gallery has curated a show of entirely Fox News and Ailes-themed art, entitled "The Roger Ailes Memorial Show: Fair and Balanced." The show will run from July 6 to August 4 and contains works from over 15 artists.

The gallery's exhibition announcement came in the form of a press release that, in lieu of providing details about the show, contained the entire text of Monica Lewinsky's pointed New York Times op-ed after Ailes' death. "This is not another obituary for Roger Ailes, who died last week 10 months after being ousted at Fox News. It is, I hope, instead an obituary for the culture he purveyed — a culture that affected me profoundly and personally," Lewinsky wrote. The article's headline, Roger Ailes' Dream Was My Nightmare, hints at Ailes' powerful role in the political divisions we see today.