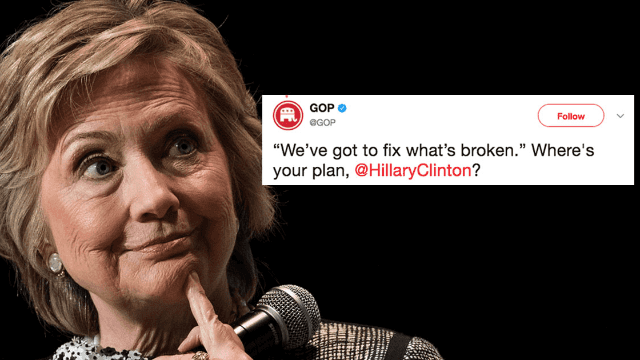 As Trumpcare falters in Congress, the official GOP account is trying to ape their leader's Twitter with snarky, trolling tweets. But they're not doing it bigly. They're doing it wrongly.

And they've decided to ask Hillary Clinton: "If you're so smart, what's your health care plan?"

Remember how Hillary Clinton ran for president, and how she actually had a comprehensive healthcare plan?

Right here. Includes radical provisions like how not to kick 23 mil ppl off their coverage. Feel free to run w/it.https://t.co/jBMFBJpSP7 https://t.co/zZoA16Ym03

It "includes radical provisions like how not to kick 23 mil ppl off their coverage," mentioned Clinton, as she posted the outline of her healthcare plans. As Obama has pointed out, that detail about kicking 23 million people off their coverage is in stark contrast to the GOP bill currently stalled in the Senate.