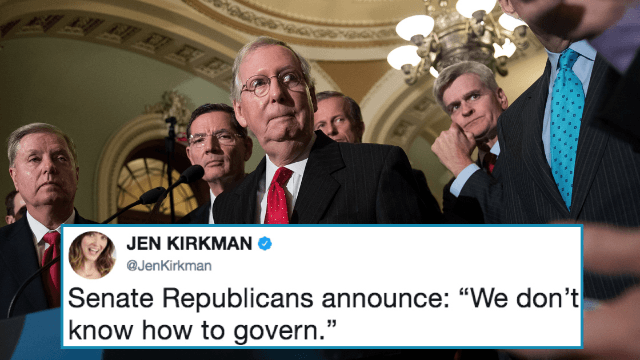 The Republican party's latest attempt to repeal and replace Obamacare is officially dead.

As reported by CNN, Republican Senator Mitch McConnell announced Tuesday that the Senate will not be voting on the Graham-Cassidy health care bill as planned. Things have been looking pretty grim for the bill ever since Republican Senators John McCain and Rand Paul made their opposition to it clear–but it all became real for the GOP on Monday, when Senator Susan Collins announced she was planning to vote "no." Without the support of any democrats or of those three Senators, the bill's chances of passing were slim to none. So, less than 24 hours after Collin's announcement, the Republicans backed out.

Many people logged onto Twitter to express their feelings on the Graham-Cassidy bill's death—and people had jokes that will make your tummy hurt so hard from laughing that you'll need health care.

In the end, the president's closing message – that the football players are bad – couldn't put the bill over the tophttps://t.co/pCu47JRqsy