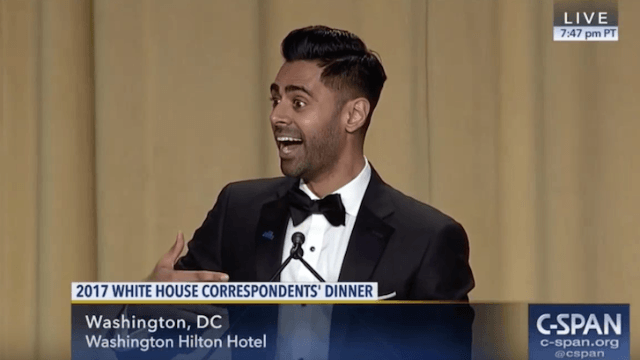 This year's White House Correspondents' Dinner—the first of Donald Trump's presidential administration—was without Trump himself. As he announced months ago (and kept announcing), he was boycotting the event because everyone's too mean to him and he's never been able to take (or tell) a joke.

That may have made things awkward for some headlining comedians, but it gave Muslim-American Daily Show correspondent Hasan Minhaj to really flex his First Amendment rights without worrying about the reactions of a melting orange blob sitting right beside the podium. "Ladies and gentlemen," he began, "welcome to the series finale of the White House Correspondents' Dinner. My name is Hasan Minhaj... or as I'll be known in a few weeks, 'Number 830287.'"